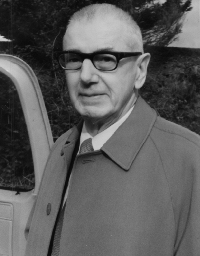 He recalls an event from that time when he was staff officer in charge of timber management. "...a twister tore up a curving swath for about 12 miles from 50 to 200 feet wide, lifting and skipping intermittently due to terrain. The only timber of value was scattered medium-sized shortleaf pine. I had to get it cruised, appraise it, advertise it, and sell it quickly to minimize damage from Ips bark beetles, blue stain, and Monochamus borers. I decided to cruise it myself, but the Assistant Supervisor said he wanted to come along for the experience. However, I expect he just wanted to size up the new arrival. We spent a couple of days using existing aerial photos to sketch in swath width and skips, and I took about 75 one-fifth-acre plots (excluding the skips). After the completion, I estimated merchantable volume to be 870 MBM Scribner Dec. C. The sale actually cut out 910 MBM. This solidified my standing with the Forest Supervisor and his Assistant, and was possibly a factor in my subsequent promotion from P-1 to P-2. It undoubtedly involved a lot of good luck as well as hard work – blowdowns are never a cruiser’s delight."

In 1946 he transferred to the Southern Forest Experiment Station in New Orleans. There he served as Silviculturist, Mensurationist, and finally from 1951 to 1960 as Chief of the Division of Forest Management research, which included forest genetics, pathology, fire, watershed, and biometry research.

In 1961 he was selected to start the Forest Service’s first pioneering research unit in mensuration with headquarters at the Pacific Southwest Station in Berkeley. In 1968 the unit moved to Atlanta, Georgia. He retired from there in 1974 as Chief Mensurationist. Since that time he has lived in Gainesville, Florida.

Grosenbaugh is a member of Phi Beta Kappa, Sigma Xi, Biometric Society and ACM; he is a Fellow of the Society of American Foresters. He has authored more than 50 scientific publications, He has been a Visiting Scientist at the University of Montana, Washington State University, Oregon State University, and Colorado State University. He was appointed Adjunct Professor at the University of Florida’s School of Forest Resources and Conservation and was awarded an honorary Doctor of Science degree from there for innovations in forest measurement and management research. He has also received many other awards from various organizations.

One of these was the Society of American Foresters award for achievement in biological research leading to the advancement of forestry. At the presentation of this honor in 1965, Philip A. Briegleb, President, SAF, spoke of Grosenbaugh saying that "...his creative contributions to forest management are in daily use throughout the profession. The prestige of American forestry, at home and abroad, has been heightened by his accomplishments. In forest mensuration it would be difficult to name an individual whose work has had greater impact." Briegleb went on to list his contributions of developing the technique of timber sale by tree measurement, which can multiply the efficiency of field foresters on such work by threefold; developing the point-sampling technique, thus eliminating the need for laboriously measuring and marking plot boundaries; introducing the concept of determining the volumes of standing trees – the Upward Progressive Totaling technique; publishing his multiple regression program – "The Elusive Formula of Best Fit"; publishing a revolutionary approach to sample-tree-measurement; and contributing new theory to the design of optical dendrometers.

Discussing Grosenbaugh’s work on point-sampling theory in an article in 1957, N. H. Sand said: "The fine old art of timber cruising is no longer what it used to be. It’s a lot better. In fact, it’s being revolutionized." He explained how Grosenbaugh built on Bitterlich’s idea of estimating the basal-area density of a forest with plotless cruising so that individual trees used in sampling could also be used to estimate volume per acre, growth, and number of trees of different species or sizes. Grosenbaugh also adapted the system to U.S. units of measure and extensively promoted it, even having to convert some of his best friends to the system."

Back to Home Page